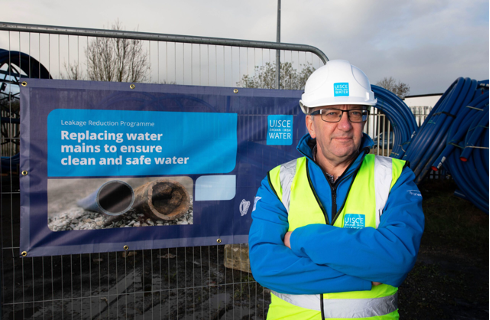 Shareridge were delighted for our Framework Contract to feature in the Limerick Post recently.

More than 33 million litres of water – enough to fill 13 Olympic-sized swimming pools – are being saved every day in Limerick City and County as a result of Irish Water’s national leakage reduction programme.

The improvements to the water supply, undertaken by civil engineering firm Shareridge on behalf of Irish Water and Limerick City and County Council, followed an extensive review of the water network in Limerick.

Several significant challenges were identified including the condition of the city’s old and fragile water mains which were prone to frequent bursts, as well as the construction of some critical water infrastructure across the county.

Since 2018, almost 22 kilometres of water mains have been replaced through rehabilitation and replacement projects.

Gerry O’Donnell, Asset Delivery Regional Lead for Irish Water, said: “Reducing leakage is not only about replacing old pipes or fixing bursts, but it also involves detailed planning, collaboration and the co-ordination of several different work streams in order to make the most impact on leakage levels in a given area.”

This website uses cookies to improve your experience while you navigate through the website. Out of these cookies, the cookies that are categorized as necessary are stored on your browser as they are essential for the working of basic functionalities of the website. We also use third-party cookies that help us analyze and understand how you use this website. These cookies will be stored in your browser only with your consent. You also have the option to opt-out of these cookies. But opting out of some of these cookies may have an effect on your browsing experience.
Necessary Always Enabled
Necessary cookies are absolutely essential for the website to function properly. This category only includes cookies that ensures basic functionalities and security features of the website. These cookies do not store any personal information.
Non-necessary
Any cookies that may not be particularly necessary for the website to function and is used specifically to collect user personal data via analytics, ads, other embedded contents are termed as non-necessary cookies. It is mandatory to procure user consent prior to running these cookies on your website.
SAVE & ACCEPT
Go to Top